It is only with the heart that one can see rightly; what is essential is invisible to the eye. – Antoine de Saint-Exupery, The Little Prince

Google quickly revealed that what seemed to be my perfect title for a new project has already been used in myriad other ways. Since “mapping the invisible” is something I have been doing myself over several years, that phrase occurred as a given. Although I worked with other word plays, trying to jettison something already “taken” to replace with something else, I decided to simply enter a stream that many other people have also encountered while mapping their own versions of the invisible. Many of us also “trust the process.” So be it.

Also like so many others, maps fascinate me. They were imperative during the several years of my previous Connecticut-Irish research as I studied places on both a global and highly personal, even walkable, scale. Maps led me to uncover the invisible both historically and in real time as I witnessed a hidden past of many specific places, now over-layered by multiple centuries of others’ awareness of their present. On another level, X-rays of my own body have revealed on more than one occasion hidden activity that needed to be put in check and forced to remain at bay. A heightened awareness of environmental world decay effected by our careless population of humans continues to reveal other invisible maps that juxtapose with the world I notice surrounding me in my day to day activities.

For these and further reasons I was ready to become intrigued with the research of Johns Hopkins biologist Dr. Jocelyne DiRuggiero. She and her team are deeply involved with a portion of land in the Atacama Desert, Chile, a place of extreme daily temperature changes. Its popcorn-like areas of salt rock, with other parts dotted in smooth boulders that appear as if sleeping, are distinctly otherworldly. By studying the biology of the rocks’ interiors, the team continues to find algae surviving within, against all odds. DiRuggiero’s microscopic discoveries may have significance in relation to the consideration of possible life on other planets, such as Mars.

In the Atacama rocks contain outwardly invisible organic matter that quietly waits to take hold and grow if circumstances become right. Like seeds and bulbs in our own environments that reveal their dormant existence when the weather warms and annual rains resume, that life which we had forgotten about or hadn’t known of previously becomes manifest as if by surprise. The first crocuses, daffodils and  hyacinths of the year did that very thing this past week in our gardens. Metaphorical thinking regarding concealed and revealed macro/micro forms sparked open-ended questions that have excited me to begin a new chapter in my own artwork.

Jocelyne and I began our collaboration in February, just before she left for an extended research trip and I was immersed in teaching and completing several projects at Loyola University. Although time was not on our side, we were able to meet on two extended occasions and share aspects of our respective work. While she was gone I began to experiment visually with details included in her research publications. Microscope fragments depicting the interiors of rock samples seemed beautifully abstract to me, pleasing collections of shapes and lines. I chose particular ones to revise in Adobe Photoshop and enlarge from their one-inch size to a 16” – 24” scale that I printed on photography paper and began to paint upon.

Two years earlier my work, “Journey” (shown on another blog post here) began in a similar way and had accidentally become an acrylic painting followed by a second, very much to my surprise. Although I had painted as an undergraduate several decades ago, generally I only use paint for necessary additional touches of color in something else I am otherwise making. I have never identified as a “painter.” Each new project of mine, however, introduces a new challenge for me to learn to overcome, keeping my own work interesting to myself and encouraging me forward. This project has opened a trajectory in my studio practice that now includes watercolor and gouache paint—no doubt a direct result of having recently made yet another gouache color wheel including tints, shades and washes as an example for the benefit of my students!

Included here are my first four “Research Remixes.” Each is paired with an enlarged version of Jocelyne’s graphics that had served as illustrations in her papers. These will be on display at Gallery Q, Milton S. Eisenhower Library, Johns Hopkins University, Baltimore, from  April 4 through 19, with a reception April 5 from 5 to 7. 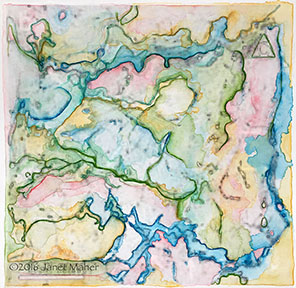 Follow Trusting the Process: Getting There From Here on WordPress.com